Our SUPERFRIENDS get an additional 3% off the total bill!

Nature's Superfoods Organic Dried Yacon Root are grown in the Andes mountains of Peru for its crisp, sweet-tasting, tuberous roots. The Yacon roots are usually eaten raw and are naturally sweet, low in calories, with a juicy flesh similar to that of an apple or watermelon. Yacon is traditionally consumed in Peru as a means to control blood sugar levels, improve digestion and prevent constipation. The dried slices of Yacon roots are ideal as a prebiotic, low-calorie superfood snack for those on weight-control diets, cancer-fighting diets, for diabetics and for those who want to avoid calorie-laden processed snacks.

YACON: Peruvian Yacon Roots naturally contain 35-50% F.O.S. (fructo-oligosaccharides) and a low proportion of simple sugars. Their sweetness comes from a high concentration of inulin, a complex sugar that breaks down slowly into fructooligosaccharides. FOS is a kind of fiber that passes through the digestive tract undigested; it serves to feed the good bacteria in the intestines, leading to an improvement in gut health, a better digestive system and better absorption of nutrients in the body. F.O.S is good for all of us as it is a prebiotic that feeds the 'good' bacteria in the gut and has been shown to actively inhibit the overgrowth of pathogens such as candida. When our gut is healthy and populated with good bacteria, the efficiency of our digestive system improves which leads to better bowel movement and better absorption of nutrients in our body.

F.O.S is a type of fiber that is non-digestible in the human digestive tract. This makes the Yacon Root a low-calorie food whilst having a minimal impact on blood sugar levels (very low in Glycemic Index). Yacon is also rich in antioxidants and boasts a good amount of minerals such as potassium, calcium, phosphorous and iron, as well as 20 amino acids.

Recommended serving: About 10g or a handful a day.

Caution: Don't eat too much in one seating or it will give you stomach upset due to its prebiotic effects. 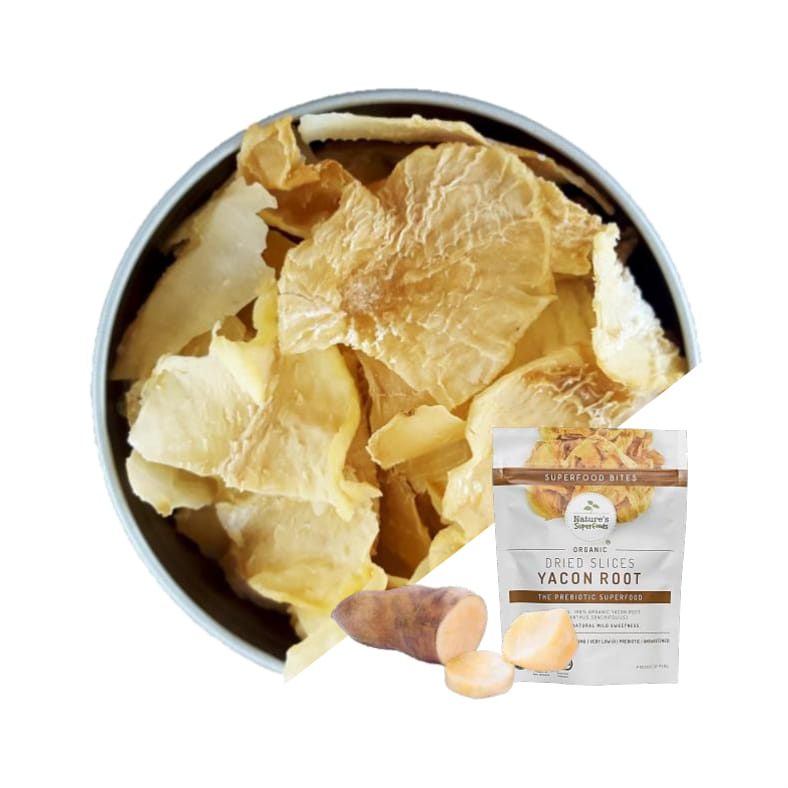 SIGN UP TODAY & ENJOY 10% DISCOUNT ON YOUR FIRST PURCHASE! USE CODE: WELCOME10